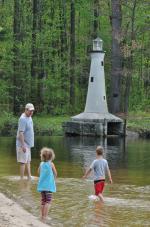 Lake Potanipo is 169.9 acres with an average depth of 13.5 feet and a maximum depth of 25.1 feet (NH Dept. of Environmental Services).  It provides habitat for the endangered Brook floater (a freshwater mussel) and the threatened Fern-leaved false foxglove, both listed on the NH Natural Heritage Inventory. There are 27 homes and cottages on Lake Potanipo, but most of it is protected from further development.

In 1969 the Brookline Recreation Commission was formed.  Shortly thereafter, the town was given a gift of approximately 1.33 acres with 250 feet of frontage and a beach area by the Eli and Bessie Cohen Foundation.  The Cohen Foundation owns Camp Tevya and most of the undeveloped land around the lake.

Recreation on the Lake

The Lake supports a number of recreational uses including swimming, boating, and fishing.

Here is information about the Max Cohen Memorial Grove, including seasonal memberships, which serves as the town beach.

During the winter, snowmobiles, snowshoers and cross country skiers are frequently seen on the lake.

Ice Houses dot the lake during the coldest months of the year.  During February, if the ice is safe, the Fishing Derby brings many young and old anglers out to vie for prizes and bragging rights.